Serendipity - On looking beyond the veil by Jenni Fagan

On looking beyond the veil
by Jenni Fagan 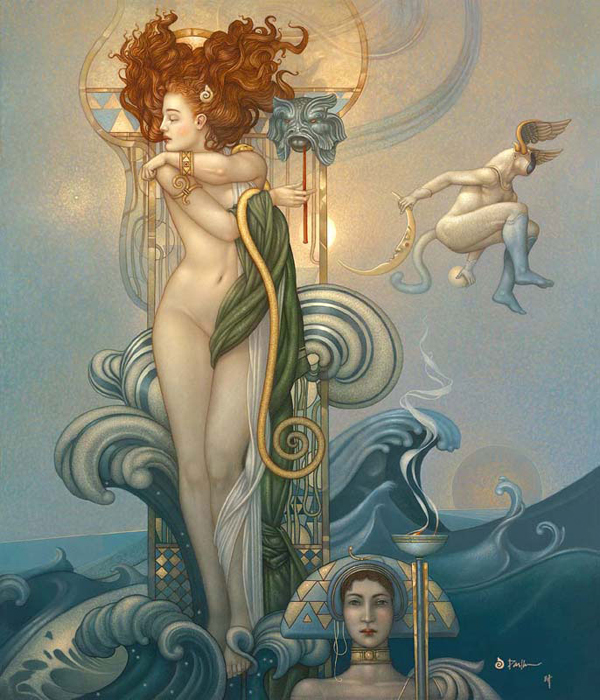 Gaia got so angry with Uranus that she cut off his genitals and scattered them across the ocean. They coalesced with foam on the surf until a Goddess of heaven and the sea was born; Venus rose from the waves. She took a lover in the son of Zeus, Ares, who was also the lover of Aphrodite. Whilst the Greek Goddess represents love and family the new Roman Goddess was fertility, eternally entwined with lust. Like most Roman deities her roots lay in Greek myth yet Venus encompassed a Goddess archetype that fits her as intimately as the shell she was born of. The cult of Venus began in ancient Italy. Julius Caesar built her a temple. Shakespeare offered poems. Titian painted 'Venus Anadymonene' (Venus Rising from the Sea). Botticelli's painting of the same name become known from the 19th century as 'The Birth of Venus.' There is Venus de Milo and de Medici. She danced with the three graces. Her epithets are countless with celestial, golden, armed, mother, lucky, lascivious only touching upon her ever shifting symbols whilst she maintains one true constant; Venus is a symbol of the soul. It is this element of Michael Parkes 'The Venus' that intrigues me most.

Whilst history peeped over the shoulder of the master painter wondering what Venus he would bring, I think the Goddess herself would have only asked him one question, 'What took you so long?' Parkes is the world's leading magic realist painter, also a sculptor and master of the dying art of stone lithography. When looking at over thirty years of his work I get the feeling that I am visiting a complete world. The characters are interlinked. The classic precision in his technique creates brevity in the unimagined so we recognize it as a truth. It is like returning to a long familiar book.

Parkes' own unique philosophical imprint is imbued throughout his work. It's in the grotesque and unspeakably beautiful, the archetypal symbolism and the flawless colours of a painter who has been compared to Magritte and Dali, Tiepolo and Albert Moore. Associations have also been drawn with artists such as Otto Dix who was part of the Neue Sachlichkeit movement.

Indeed Franz Roh first coined the term magic realism to describe the post expressionist painters. "With the word 'magic,' as opposed to 'mystic,' I wished to indicate that the mystery does not descend to the represented world, but rather hides and palpitates behind it," Roh explained in the preface to an essay in 19251. When you speak with Parkes about his philosophies and what he seeks through his painting it seems the origins of Roh's essay and the personal search of the artist are interlinked.

"There is the Eastern concept of the avatar, a being that comes down to the Earth plane. Avatars are great teachers who take on physical forms and through those forms bring new energies into Earth's plane to aid in our evolution of consciousness.

Of all the avatars in history, few are female. 'The Venus' painting is my imagining Venus as a female avatar coming to Earth, bringing the feminine energy of harmony and beauty. Mercury, the messenger of the Gods, grasping the moon, announces the beginning of an Earth changing event," Parkes told me. If Venus is Parkes' penultimate avatar, the feminine, the unconscious, then is it pertinent that she ascends to the Earth now, at this particular instance of time?

"I paint to aid in my own personal search for this evolving consciousness. I don't feel alone in this. Forty years ago when I lived in India lots hippies and so on were there, also searching and you felt like you were part of a very small family. I feel this has grown and matured and I now meet more people than ever who are searching. The painting I do, through the combination of symbols and their particular energies become a comfort to me on my search as well as to others. It's like a radar and you send out a symbol, a sign, a painting—into the world and I do this from my studio, painting from the interior, the unknown—radar emitting these tiny bleeps and more and more people seem to recognize it and return it with their own," he says.

This is the magic behind the veil, the truth behind the chaos, the stillness behind the layers sometimes seen or unseen but always understood to be felt intuitively, glimpsed perhaps abstractly. Michael Parkes is committed in his work to revealing this magical layer—veiled perhaps from reality but nevertheless as real as the mundane or chaotic. We often find in each other recognition of something unspoken. Perhaps in 'The Venus,' Michael Parkes does not just peek behind the veil; he lets it fall to the floor and paints each detail he sees with absolute clarity. The incredible beauty and space of stillness or hope in the light rising behind Venus is not an accident, it is a deliberate focus that Parkes returns to again and again in his work which seeks to expose a truth of beauty and harmony, not just in what we see but most especially in what we don't. In our current climate of chaos and nihilism it could almost be considered a political stance. Venus ascends to Earth and Mercury with his smooth skin and faceless muscularity grasps onto the crescent moon sending out his message to the Gods and to us all, that this is an Earth shattering, Earth changing event. Perhaps tediously academic deconstructed ideals that stamp their feet and dissect art in a mathematical fashion miss the point entirely. I could take apart each symbol in 'The Venus' but I am choosing not to because the point is, that if allowed to, that part of us, the purer, intuitive, less guarded and worldly-focused part of ourselves, the untrained or ungoverned, you could call it a higher element or perhaps just a more innocent awareness that all we see in this world is not all that is there; that part of us knows what it is recognizing. It accepts that what we see can be real yet what we cannot see can be just as valid and sometimes more so. For people made from the carbon of planets' magic cannot ever entirely be rationalized away. Who knows, perhaps our recognition of this effortlessly returns a tiny pulse out in to the great unknown. Each pulse a layer of the beat in a collective symphony where waves begin to crash, as Venus rises from the sea.

Michael Parkes was born and raised in a small American town in 1944. He spent several years living in India in his mid twenties. He works in a studio in Spain where he has lived with his wife Maria since the 1970s.

Please visit www.theworldofmichaelparkes.com for further information. This includes the New Aurographic release entitled 'The Venus' limited edition giclee on canvas and the very limited edition Deluxe Embellished version which is much larger with details hand painted in gold.

Main picture is from the Aurographics Collection, copyright Michael Parkes 2008. The title is Venus Embellished.

Story Copyright © 2007 by Jenni Fagan. All rights reserved.
Previous: So Many Stories by Katy Wimhurst | Next: Book review: Cone Zero by David Hebblethwaite

Jenni Fagan is a Scottish writer based in London. Whilst considering 'The Venus' over many hours this month she kept thinking of Gertrude Stein and her portraits where she attempted to capture something of the essence of others. Essences aside she very much enjoyed looking at something other than her scraggy pigeon with the gnarled trunk hollow stump and it's two tiny crocodiles. She is presently trading this in for pyramids and camels, so if you are on the Nile later this month or in the Cairo bizarre or especially at the squint pyramid, you may see her and if you happen to be a mustached Belgian or a smiling camel then please do say hello.