Cats and Bags
by JS Watts

I think today is the day. I have been watching her intensely and I can see her starting to fade. I don't want to move too soon, but I can't bear to see her suffer in any way. Timing is all: when to move; when not to move; the precision of the moment.

Is that callous; focussing on the technicality of the timing rather than on what I am actually planning to do? Perhaps. Perhaps I am just trying to deflect my thoughts from the deed itself: so cruel, so kind, so final. For that reason alone I feel the need to concentrate on the timing, but getting it right the first and only time is also essential. Moving too late is the difference between love and torture; moving too soon is the difference between euthanasia and murder.

There. I've let it out of the bag. I am talking about killing her. A mercy killing, yes, but a killing just the same. I need to say it as I intend to do it: quick, clean, unequivocal.

It's brutal, killing the one you love, but it has to be done. "Why?" you may ask, and that's a fair question; a fair question, but an obvious one. Still it is also an honest one and an honest question deserves an equally honest response. So I shall explain. I have the time, for a little while.

I first realised there was a problem a month or so ago. No, let me be more precise. The first real signs of change in her appeared about a month ago. Prior to then, for a little while in advance, my instinct had told me something wasn't as normal with her, but there weren't any clear signs, just my gut instinct.

I should explain that we are very close. Extremely close. Some would say unnaturally close, but they would say wrong.

We identify with one another. There is empathy, an emotional bond, maybe more, but that would be straying into the world of fantasy and fiction and I am a doer, an advocate of the world of the here and now. So let me just repeat that we are very close and that I suspected that something was wrong with her sometime before the symptoms started to show. A month ago, however, the first signs started to appear for real.

To begin with she was slightly off her food. Not that much, initially, I admit. She has always had a healthy appetite, you could tell from looking at her, but there was a dulling of its edge. In particular, she was not so quick to go for the food she really likes. Yes, I know that, in the past, she hasn't always eaten the little delicacies and titbits that from time to time I indulged her with, but to be honest, those were more my indulgencies than hers. It made me feel good to bring her gifts and surprises. I therefore tended to bring her things that I liked, rather than things she would have chosen for herself. This time she was declining to eat the stuff she really liked; the stuff she had previously gone wild for. So that was the beginning: a gradual reduction in her food consumption as something began to gnaw away at her appetite.

Next came increasing lethargy. Never the most active of individuals to begin with, she became increasingly lazy and prone to dozing for no apparent reason and at all the wrong times of the day; times when normally she would have been active and doing. Also, because of the amount of time she was now spending sleeping, she had less time for me, which was distressing and not entirely tolerable.

Then it was a case of her smell or, should I say, the way that she smelt. Ok, maybe that is a tad gross, but I told you we were really close. When you spend a lot of time together, really together, you get to know everything about an individual: their mannerisms; their idiosyncrasies, their daily habits, how they smell when they are well. She used to smell good. Now she smelt less so. Something was most definitely wrong.

Finally, I noticed the lump; felt it first and then saw it. We were curled up together on the bed in that intimately entangled way that those who are truly together adopt. I touched her tummy and there was a bulge, a solid lump, that hadn't been there before. I couldn't tell if she was aware of it or not, but I most certainly was. It was definitely something that should not have been there. Also it was growing. Each day to my eyes, and these eyes are pretty good, I could see it getting bigger and bigger.

It was not that long before it started making her sick. She was throwing up regularly and that was when I realised that love has indeed to be cruel in order to be kind. I couldn't just watch her suffer like that and not do anything. I had to put an end her distress. I decided that it was a matter of when, not if. In the meantime I wanted to make her last days as happy and as comfortable as possible.

I tried to spend as much time as I could with her. I made sure that I was attentive to her needs. Even when she was sleeping, and she was sleeping more and more, I sat with her or close to her and kept an eye on her.

Of course, she's quite intelligent and she eventually cottoned on to the fact that my habits and behaviours had changed. She even thought that it was me who was ill. She was quite worried by that, bless, and as a result was more attentive to me, which I couldn't complain of. Although she seemed to be eating both differently from normal and less and less, she made sure that I was well fed and got the little luxuries and treats that I had always made sure that she knew I liked.

If I am honest, and I have promised to be honest, haven't I, I did play up the under-the-weather thing somewhat. Fussing over me gave her something to do and distracted her from her own predicament. It was also very enjoyable on my part.

But enough is enough. You can only watch someone suffer for so long without taking positive action yourself. It has now come to the point where it is not fair on her anymore. I need to be decisive and put an end to her suffering before it gets any worse. Today is the day.

She mustn't know of course. That's part of the kindness. It must seem like a totally natural thing; a mundane happening in an otherwise uneventful day. Ok, perhaps not so mundane, how can it be, but keep deviations from routine to a minimum and she won't realise what is happening until the very last minute and maybe not even then. That's where the timing comes into play: the right movement at the right time; the precision of the moment.

On that note I need to be off. She'll be waking up again soon and I want to do it whilst she is still drowsy from sleep. It makes it easier for both of us that way.

Article from the Weekly Gazette, last week in May, page 5, final column: Miriam Gatta, age 36, was killed last week after falling down the stairs at her home. Doctors confirmed that her neck was snapped in two by the fall and that she would have died instantly.

Although police initially questioned her friend John Adams, a local GP in the town, in relation to her sudden death, he was subsequently released without charge. From the account of events he gave to the police it is believed that the accident took place in the afternoon, shortly after Miss Gatta had woken up from an afternoon nap. The likeliest explanation is that in a still sleep befuddled state she trod on her pet black cat, asleep on the top step of the darkly carpeted staircase, which jumped up and became entangled with her legs causing her to fall to her death. Friends and family have confirmed that Dr Adams remains distraught at both the continued rumour and gossip surrounding him and at the death of Miss Gatta herself, with whom he had allegedly been planning on starting a family. 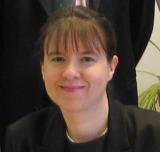 J.S.Watts lives and writes in Cambridgeshire. She writes mainly poetry and fiction and has had work published in a variety of magazines and on-line in both the UK and abroad including: Acumen, Ascent Aspirations, Envoi, Orbis, Poetry Monthly, Tandem and The Ugly Tree (to name but a few, because the bio is supposed to be both light-hearted and brief and one out of two is better than nothing).